Posted at 10:17h in Uncategorized by Digital Alchemy

In August of 2007, I was involved in a head-on collision with a delivery truck that swerved into my lane, and my life changed forever. 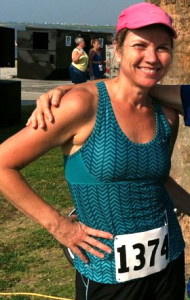 After months of recovery and physical therapy, in April of 2008, I received a flyer from Kim featuring Carolina Adventure Boot Camp in the mail. (now called Never Stop Playing Fitness) I thought it might be a good idea to check it out, but I put that flyer in a drawer and didn’t do a thing. By September of 2008, a full year after my accident, I had recovered, but I was out of shape and tired all the time. I thought of that flyer, and pulled it out of the drawer. I called and told them I had to start the next day. It was suggested to me that I wait until the next boot camp session to start in three weeks. I said “You don’t understand, if I don’t start tomorrow, I might not ever make it.” I was told “Come on.” At 5:30am the next day, I was wondering what I had gotten myself into! From there I went from being someone who rarely exercised beyond walking to someone who has now completed 7 half marathons, and the Disney Marathon, along with many other smaller races.

I’ve developed close, lifelong friendships with the other women in the program and look forward to seeing them every weekday morning where we have fun and motivate each other. The workout is different every day, and you don’t have to think or plan, you just do what Kim says, she does the thinking and planning for you! At 53, I am in better shape than I was at 23!